I did something creative at work today.  In honor of the first day of the year, I let go of my standard customer question “What’s been a highlight of your day?” and instead asked “What’s a way you intend to express your creativity in the new year?”  I got back some great answers, ranging from “Continually adapt to new cultures as I practice my international consulting business” to “Learn how to build a table – I’m a musician, not a carpenter” to “Parent my two-year-old”. 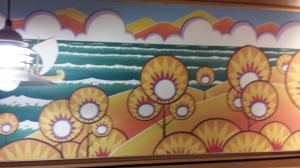 Our cafe at work is celebrating the creativity of our staff with every wall covered with staff art. This massive, beautiful painting was created by my old roommate Will, a brilliant artist in several media.

I felt good about the results of the question – and, as always, a lot of people asked me the question back.  I had some fun responding to this by talking about writing, but sometimes when you target a positive new behavior what you get first is a clearer picture of where you’re stuck – what’s in the way of  that behavior.  That’s what I got today – more clarity about what makes it hard for me to be creative.

Over lunch I had a conversation with a colleague in which I told him that I don’t like the way he does announcements over the public address system in the store – that it’s too weird for me.  I’ve been chafing on this for a while – waiting for the right time to tell him.  Some part of me had a fantasy  that he would wake up, repent, start doing more normal announcements.  He didn’t do any of that – but he also didn’t get defensive.  I think his lack of defensiveness allowed me to take a look at myself.

By the end of our 20-minute conversation, I was asking myself What is it about his weirdness that I find so threatening?  Why does it bother me?”  I’m all about creativity, improvisation and risk-taking – and that’s exactly what he’s doing.  Why don’t I support it?  Why don’t I regard him as a real role model?  What kinds of risks do I take with my announcements?  None – they’re very straight-arrow.  I’m sure not practicing improvisation in that area of my work life.

So this stuck with me today – especially in the face of what I was doing to celebrate creativity, to aim towards creativity.  It really was hitting me between the eyes, in terms of how I get in my own way.  All the ways that I focus on what’s negative – but maybe especially my fears of being weird.  I have a mental illness – bipolar disorder.  What does that mean?  For some that very term means weird – and definitely not good weird.  Sometimes I’m just fine with it – it feels like just one more way to be in the world.

Today when people were asking me where I planned to express my creativity this year, I would say “Two writing projects” and I would tell them the title of this blog, but not the subtitle – “The ups and downs of a bipolar cashier”.  I not once got around to telling them about the second writing project – online training for people with bipolar disorder.  I left that out because I would have to explain about me having bipolar disorder.

It seems like as long as I’m holding a concept of weird as a bad thing to be, I’m going to keep myself stuck around my creativity and self-expression.  What is weird anyway?  It’s different too much or different bad.  So am I going to go through life scrutinizing my differences, to see which ones are bad? Am I going to have a continuum that goes “normal – creative – eccentric – weird” and continually be assessing where people lie on the continuum?

It seems like the more I give other people a break – room to be different – that will automatically translate into giving myself a break.

Waking Up
What if you are more – really much, much more – than you think?