Monty was an individual – his gift was being true to himself.

Monty (Montague Sam) Berman has been my best buddy for 35 years, but we have not lived near each other for 30 years – until last June, when he moved here to Asheville after living in the same house in Ithaca for 15 years.  Moved here at age 85 (I’m 68, but Monty thrives on close connections with younger people), knowing no one but me.  Came here hoping that he would somehow get more opportunities to teach than he was getting in Ithaca – and that maybe we would get a chance once again to teach or lead workshops together.

Monty could be very difficult at times – and could also be full of joy. He pissed me off more than anyone else in my life – and there were other times that we totally, completely got each other’s sense of humor.

Monty and I led men’s groups together 30 years ago, before they became so popular.  He loves to tell the story of the one group where he played the good cop and me the “shit detector”, who would call men on their shit when they weren’t being really honest.  That’s a lot different from how I had facilitated before – or ever again did after that group.  And maybe the last time this irascible and challenging character Monty ever played the good cop in a personal growth group – maybe that’s why it was so much fun for both of us, because we were each going way outside of our usual personas.

Monty was incredibly smart – and largely self-taught. He was in many ways a kind of personal growth guru – but he seldom ever set foot in a personal growth workshop. He would read Fritz Perls and others, but mostly he wanted the insights to come out of himself. Even if something originated with John Welwood, he wanted to chew on it until it became his own.

When a new doctor asked Monty yesterday what brought him to Asheville, he said “My best buddy John”. (I’m still John to all my pre-Asheville friends.)  Maybe he moved here so I can help him die.  I have thought that thought several times since Monty’s lab studies and MRI’s over the last few months have showed his long-time prostate cancer to now be wildly out of control – moved probably to his bones, definitely to his liver.  The most recent prognoses have ranged from 1 – 1 1/2 years (his primary doc) to 4-5 years (his oncologist, who is very impressed by the new drug he put Monty on).  The new doc that Monty was talking to yesterday was the ER doc at the VA Hospital, who examined him, listened to his symptoms (a ferocious new pain in his side, which she thinks is bone cancer), went through all his records – and told him he may have just weeks to live. 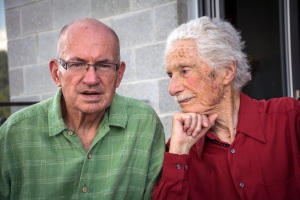 Monty challenged me more than anybody else in my life – and sometimes quite harshly. And nobody has ever admired me more. Our relationship was sometimes a battle, but a battle between equals.

She referred him to the VA hospice unit, with a promise that if he gets stronger he can go back to his apartment (or maybe better an assisted living apartment).  Monty and I have a tentative date to run a workshop at Jubilee in February: “The Case for God”.  Led by Monty (a devout atheist) and me (a non-theistic mystic), I think it will be hot.  Let’s all picture him being strong enough for it. 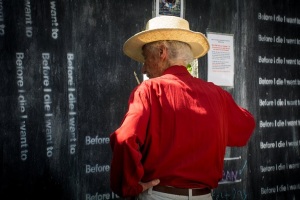 Monty adding his own vision to the “Before I die” wall on Biltmore Avenue – photo taken August 22nd. Monty said that he didn’t like some things about himself – like how judgmental he was of others – but that he never got down on himself for it, never felt bad about himself, never felt guilty. I don’t know how he pulled this off – I couldn’t – but I believe he did. When he walked through that final door, I’m sure he did it with no regrets.

I wrote this post Friday afternoon, but didn’t have any of my Monty photos in the laptop I was using so didn’t post it.  Monty died Saturday morning at 5 a.m. All photos courtesy of Maureen Simon, who very quickly brought forward and captured so much of Monty’s spirit and depth and aliveness – and who I think kind of fell in love with him, which was maybe why he let himself shine for her.

Waking Up
What if you are more – really much, much more – than you think?